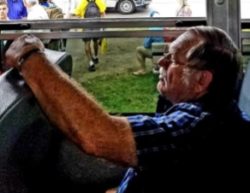 Eddie Clements generally writes and sends these newsletters. However my name is Braden Hobbs and for those of you who do not already know, I have the unfortunate duty of informing you that our fearless leader Eddie Clements has peacefully passed away. Eddie passed in Oshkosh after having spent the day enjoying Airventure. This legendary man is now in our memories, forever flying and gone west. His legacy will be carried on by HAWK and our generous supporters for many years to come.

Piper 9606W
HAWK`s 1967 trainer made the annual pilgrimage to EAA airventure at Oshkosh this year under the command of HAWK`s new private pilot Braden Hobbs. Braden made this flight along with HAWK`s flight instructor

Sterling Hurst in Lightning 538RH and Shay Boe in Cessna 35441. During this flight the vacuum system in 06W failed. This problem was quickly fixed upon return from Oshkosh by installing a spare vacuum courtesy of Jerry Freidman. Since Oshkosh 06W has been flown for EAA young eagles by experienced pilot Jerry Freidman.

Along with young eagles, Sterling H. has given many hours of flight instruction with Krista J., William M., William S., Logan B., Braden H. and many others. In an effort to keep kids flying, the HAWK Aviators board has approved Braden Hobbs to fly missions with HAWK kids. Since the first approval, Braden has flown 5 missions in 06W and Randy Owens has flown 2 in his Zenith 701. 9606W will be going into annual inspection on February 1 leaving HAWK without a trainer for a period of time. Along with inspection our Piper will receive a new fuel strainer valve and our directional gyro will need to be removed and a new one will need to be found. At 52 years young the Cherokee flies onwards.

Zenith 838CP
Work continues on HAWK’s Zenith 701, with all damage repaired and the new Rotax engine mounted. HAWK has been studiously working to 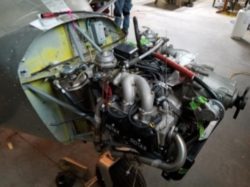 fabricate engine controls and rig the control surfaces. Along with these tasks, new fairings have been molded with Pat Wehling in charge of the aircraft. Pat can be found rigging controls and reverse engineering plans. Tim Allen has been fabricating new parts based on Pat`s plans and with necessary changes to account for the new power plant and wings. Model aircraft builder Logan B. is putting his foam shaping skills to good work molding new aerodynamic fairings for the Zenith. These foam molds are then given a fiberglass shell. That shell is then removed from the foam and becomes a new fairing. William M. has taken Eddie`s plans for patching skin and has nearly completed making two new inspection ports out of two holes long ago misplaced. With new parts made and ordered every week it is beginning to look a lot like an airplane. HAWK is grateful to have a hanger neighbor with a completed 701, Randy Owens. He is happy to allow Pat, Tim, and Braden inspect his 701 frequently to see how something is supposed to look.

HAWK`s flagship aircraft 0DH sprung a leak in the right side fuel tank and with no inspection ports in the area the hard choice was made to cut through the wing to fix the leak. Braden Hobbs along with student William M. cut open the top of the fabric and heated and removed glued wood in order to replace the fuel line and value assembly. Jerry F. inspected the repair and determined it fully repaired. The aircraft now awaits some minor wood splicing and regluing followed by restitching of the wing fabric.

Cessna 13245
Sean G. has picked up where Eddie left off in the restore of HAWK`s 172. With the wing disassembled and control surfaces detached, new skins 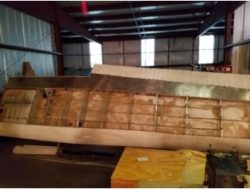 are being fabricated. With the aid of capable students Solomon B. and Krista J. the Cessna wing is being put back together and will soon be in one piece. With aid of Braden H. control surfaces are also being made whole again. At this rate the hail riddled Cessna may be put together within a year. However the expensive part has yet to come as the Cessna needs new electronics, a new interior and we have yet to even look at the engine.

Firefly 90555 and others
Unfortunately after Eddie`s passing we no longer have a balloon instructor or even pilot thus our impressive collection of hot air balloons sits mostly untouched awaiting a new pilot to teach us the lessons of three dimensional billiards, as Eddie said. Despite the loss of Eddie’s knowledge, 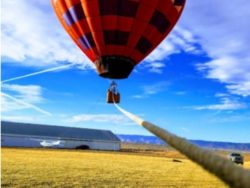 his main A+P student and balloon student, Braden Hobbs supervised assembly and organization of the different systems, determining what systems would be determined airworthy if inspected and what was wrong with the others. HAWK however has now gained a new source of information in a new up and coming pilot. Congratulations to James Mullin who passed his hot air balloon private license check ride this month, we are now awaiting his government paperwork to be processed. After a mechanic is found to do an annual inspection on 90555 HAWK balloons can again take to the air.

Lighting 538RH
As you may have heard, the beautiful late-model and low-time Lightning aircraft donated to HAWK last Spring by Ron and Gayle Huddleston, which we intended to sell at Oshkosh last summer, suffered a

nose-gear collapse (and a serious prop strike) upon landing there. Luckily, the plane was insured and no one was injured. Repairs at a facility at Oshkosh are about complete, and this plane will again be offered for sale in the coming months.

Shop and People
Toolbox Project
Braden Hobbs has been teaching new toolbox instructors William M. and Shay Boe the art of teaching kids and fixing their mistakes and two more toolboxes have been finished. Congratulations to Aidan (left) and Britton (Eddie`s grandson on right) their hard work has been rewarded and they now have a toolbox that will last for a long time and have moved on to working on airplanes. Three years ago I stood right where these two stand and now I am a successful leader at the airport. These two have the potential to outdo me by leaps and bounds.

Hanger Space
Eddie was donating the use of his hanger as the main hanger and after his passing HAWK had to take on the rent of another hanger. Moving the tools and build hanger into one of the other hangers was considered. However, due to lack of space and thanks to gracious donors the build hanger has remained where it is for now. Nevertheless the idea is still on the table.

New Management
Eddie was HAWK`s general manager and with his loss the board of directors Bryan Miller, Michelle Hobbs, Sterling Hurst, John Wilson, Don Coleman along with help from John Caldwell have had to pick up lots of slack. Although a challenge the board has done a good job and the chaos is limited. With the board organizing adults and Braden organizing kids the work is back on track and attendance is up.

Jobs in Aviation
Recently a HAWK aviator has secured a job in aviation. Braden Hobbs signed a contract with the US Army as an air traffic systems controller and will leave for basic training July 22nd marking another of Eddies milestones of success for HAWK.

The Future of HAWK
Many people have taken new roles after Eddies departure and these roles are still shuffling around. Two HAWK aviators will be graduating this year in the class of 2019, William S. and myself, Braden Hobbs. Finding new instructors and teaching others of the past and of what Eddie taught me has been a great challenge and priority for me. The future is truly an uncertain place for HAWK. However with that said for as long as there are kids to be taught and funds/materials to teach with, HAWK will be here to follow the mission Eddie provided, teach kids aviation.

Many Thanks
We especially wish to thank all the supporters who have given HAWK financial support in the six months since Eddie Clements passed away. We received many contributions at his Memorial Service and several substantial ones since then, including very generous amounts from Dalt and Patsy Garlitz, and from Irvine Smith. It has been especially helpful during this period of transition to have the funds we need to maintain our youth programs. Thank you all so very much. In addition, during the last year Russell Franke donated a late 1940s Luscombe (sans motor), and Robert MacAdams of Green River, Wyoming donated a used Jabiru 120hp motor (both were even delivered to us). Without the support of these exceptional individuals and company’s HAWK could not function.

In Conclusion
Thank you for you patience as this letter is long overdue. If you have any questions or want more details on a project please visit our website at