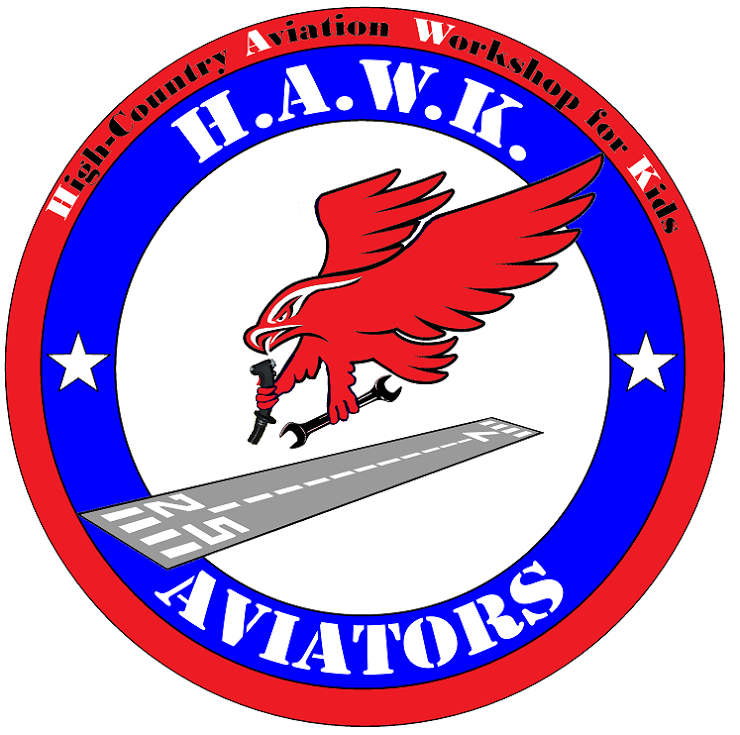 HAWK and EAA chapter 800 are separate organizations that work hand in hand to get and keep the kids interested in aviation careers.

This newsletter was delayed because of numerous exciting things happening with both organizations that carried over in to March. I will start with the March happenings then back up to January.

Braden is now a Private Pilot
He passed his check ride with flying colors. Braden is HAWK’s first official in-house trained pilot. There will be more pilots shortly.

Sterling H-HAWK’s CFII was invited to attend the AOPA Bob Hoover awards ceremony in Washington DC. Sterling was fortunate enough to sit at the table with Mr Vangrunsven and his wife. (yes the VAN’s aircraft owner that has over 10,000 airplanes flying and another 4000 plus in construction). Sterling had a really good time and really represented HAWK. Sterling was fortunate enough to rub elbows with all the VIP’s in aviation- lucky guy!.

J F and his wife Rlee brought their personal Eurocopter AS350B2 helicopter to the EAA Chapter 800 March monthly meeting at MACK and flew 15 of the HAWK and EAA 800 kids and also flew 5 HAWK mentors. A Eurocopter AS350B2 is not inexpensive to operate, it was a real treat for the kids. J F flew 5 kids at a time for about 15 minutes and the ones lucky enough to get the co-pilot’s seat actually got to fly the helicopter. Braden, Krista, Kaitlin, Shay (a HAWK mentor) all got helicopter control experience. HAWK could really use a Donated Helicopter as the kids are hooked. If anyone happens to have one just sitting around?

Programs like bringing a Helicopter to an EAA meeting really helps keep the kids interested. Jake M(15) talked about his hot air balloon instruction at the meeting and how excited he is to be able to start feeling like he can fly it. He is getting good and should be able to get his Private pilot’s license this summer when he turns 16. He is getting close to doing his solo flights and has his Student Pilot’s license. A little more instruction and he will be ready to solo – he just needs to get his written test out of the way. One big problem in Ballooning is the lack of Designated Examiners. There are not any balloon Designated Examiners in Colorado and the only ones are in most of the west Utah and New Mexico. It seems that there is getting to be a lack of Designated Examiners in all phases of General Aviation.

The EAA chapter meeting also dealt with figuring out how the EAA Chapter 800 and HAWK trip to Oshkosh will be handled; what kids are going and who will be mentors to oversee the kids. Another discussion concern’s the funding and logistics for the trip. This will be the third trip for the organizations. The kids are lining up to go and are really excited.

The next topic was the MAY 18-20, 2018 Mack Fat Tire Jamboree. EAA Chapter 800 with HAWK’s help is feeding the attendees and their solicited help at the chapter meeting. Anyone wanting to help please contact EAA 800 president Kim Neibauer or Ken and Jerry Hurt. The Jamboree is always interesting. Mack has free camping and airplane parking areas on a nice manicured grass area. Plus there is an evening bonfire and other goings on during the event. Bring your airplane and come play or if you do not have an airplane still come enjoy the festivities. (I would bet J F could easily win the short takeoff and landing competition).

Now the HAWK Happenings
As mentioned above Braden’s work has paid off he is now an official pilot! He is HAWK’s first in-house trained pilot. He is starting his next rating – his instrument rating plus his Hot Air Balloon rating. (Braden turned 17 in January).
Logan has now soloed in the family 172 and is working on his hours for his Private. He turns 17 in August and should be ready for his Private about the same time.
Jake and Christa should have their Hot Air Balloon private’s before years end.

The Kids are learning!

Braden took his checkride with Lynn French the Designated Examiner. He chose to give him the test in the HAWK Cherokee. So far, Braden seems to finally be in harmony with the weather gods. Braden plans and the weather turns on him. Lynn French issued Braden one of the last paper student pilot certificates before the IACRA program went into effect. So far, thanks to generous donations of cash, airplanes and other items the HAWK kids can afford to fly the Cherokee for nearly free as long as they work in the shop and earn their time. Five hours in the shop gets them one hour plus $10.00 for insurance for flight time in the Cherokee. Braden is the caretaker of the Cherokee and rounds up the younger HAWK kids to clean it, keep it nice and shiney and now he can fly them. Sterling is the mentor and instructor in the Cherokee. Jerry F is the AP/AI that keeps the maintenance current.

N13245
The HAWK 172 is being reskinned due to the hail damage to all the top surfaces. The wing is in the Cessna wing Jig and is being taken apart. Solomon B is removing the damaged firewall. Christa and Collin have removed the tail and are currently reskinning the wing and control surfaces. Collin, Solomon and Logan are the crew working on it with Shay and Eddie as the mentors. This is a big project and will be years in the making but will make an exceptional 172.

The Tool Box Program
This program really shows the kids how to do aircraft type sheet metal work. And is very active. There are about 20 boxes in various stages of construction plus more than 10 finished. Tristan, Ryan, his brother , and Collin are doing a very good job on their boxes and should progress to aircraft work shortly. Collin is working on the 172 mentored by Christa. Lyle Bingham HAWK’s web guru brought his balloon over from Utah to get it annualed and to attend the HAWK board and members meeting February 10th 2018. After the HAWK meetings his balloon was inspected by HAWK’s balloon inspector with the help of the HAWK kids and returned to service after a few minor repairs- most problems found by young eyes. While at Mack, Lyle made a nice donation to HAWK that was matched by the little company he works for called Dell (Yep that computer company). Seems they support what their employees donate to nonprofits with a special program of matching funds. HAWK is really fortunate to have someone of Lyle’s caliber donating their valuable time to make the HAWK program work. Braden works with Lyle and maintains the web site with Lyle. Braden is also getting his Solidworks certification and teaches kids Solidworks at his High School.

Watch for Beth Stanton’s article on the HAWK program in the MAY 2018 issue of Sport Aviation- it should be interesting.